Mom loves living in Istanbul. Me, not so much.  Mom says my stress is her stress.

The day Rita’s and my life changed. The long car ride to the longer plane ride. Rita and I were comforting each other.

When we moved here we lived in a hilly part of town.  I loved all the cats on the street.  They are different from California cats – not afraid of me.  They just stand and spit…I like it when they run and I can chase them.  Mom made me leave them alone.  Now people laugh at me…there was a kitty and it blocked the stairway we were on.  I left it alone as I was supposed to, I gave it wide berth, so there wasn’t room for us to walk on the stairs…people watching thought I was afraid of the cat….can you imagine?  I do chase a cat when I can…

In California, most people said nice things to me, or ignored me.  Being ignored is fine…I’m not worried about other people or dogs, I just follow Mom and Dad and the toy they are holding.

Istanbul is different.  People and other dogs sometimes are not too nice.  Mom doesn’t always see the mean street dog sleeping under a car, and is surprised when I try to get away.  I have to, because those dogs bark a lot and bite some.  Mom’s learned to hang onto my leash, to protect me from cars, in case I have to dart away from the street dog.  I am glad Mom and Dad respect my need to avoid the street dogs.  Sometimes there are so many on one street that we need to go a totally different way to get somewhere.  Mom and Dad pay attention to my needs, and I am relieved.

My old life. In Carmel CA. I used to draw a crowd on the beach…they called me “ballerina”

At least Istanbul has water. We live in Moda because of this spot.

It is hard to make friends here.  Many people act very afraid of me.  They make unfriendly faces and run away.  Some kids think it looks like fun to throw the ball into the water for me, but are afraid of me when I bring it back to them.  Some people want me to come to them, but not too close.  What is wrong with them?

This kid couldn’t resist my game 🙂

Some people are very mean.  This morning there was a friendly dog with a halter but no leash…his mom was nearby waiting for him to come inside.  We played, peed on the same curb, and sniffed each other.  He then went inside.  But, a friendly (surprise!) street dog wanted to join the game, and came to sniff me.  I knew we were in the middle of the street, Mom was calling to me and a car was coming.  We didn’t get out of the street in time, so he just hit us.  His fender was plastic, he wasn’t going fast, it was really just a nudge out of the way…but Mom was really mad!  Dad said, “Good thing I wasn’t there”. 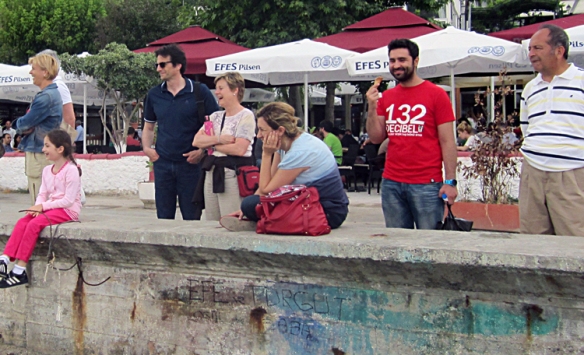 I draw a crowd here too!

I like the big park across the street, and I like to swim in the sea.  The park, the sea, the weather are all similar to home, but here I am trapped inside, with no gate that gets left open, so I can’t escape and go roaming by myself.  Sometimes kids in the park like me.  Dad always invites them to pet me, and get to know me.  Sometimes people understand that I am a sweet, obedient girl…mostly though; they don’t even give me a chance.

Dogs with families and homes aren’t always that nice either.  They steal my ball in the park, and their parents don’t stop them.  They get away with things.   Like, they pull their people all over the place, and they bark at me.  Mom and Dad won’t let me do that.  Their parents don’t always pick up after them either.  Mom is so fanatic, if I happen to poop on the steep slope in the park, she climbs after me to clean it up.  I don’t know why she bothers; no one else would do that.

We live in an apartment now.  In our California house I could bark as much as I wanted, although the parents always wanted me to stop.  Here they have some machine that bothers me when I bark.  I limit it now to the things I must bark about, like when the doorbell rings.  When they are gone they close all the curtains so I can’t see dogs outside to bark at.  Pretty boring.  I used to bark my head off at Dolores and the vacuum cleaner.  Wouldn’t you?  I hate that machine, it scares me.  Mom and Dad have been doing the vacuuming, so it’s not fun to bark at them.  Today they have someone else doing the vacuuming…but I’m not barking.  Maybe I’ve outgrown that. 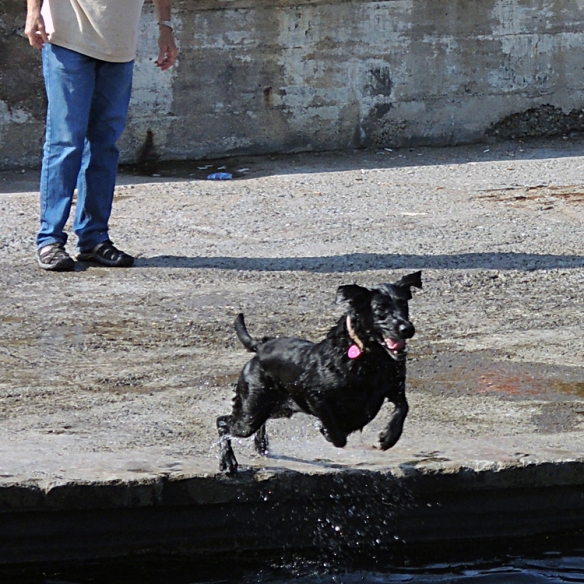 There are some things I love, but I can’t tell you why…the simitici, for example.  He is a man who carries simitlar (Turkish “bagels”) on his head, and walks the neighborhood calling, selling to people who send baskets down on string.  He takes the cash, loads the bread and they haul it up for breakfast or afternoon snack.  That call really touches something deep and primal in me.  When I hear it I can’t help but throw my head back and join in with a howl.  It makes the folks laugh every time.  They call him “my boy”.  Sometimes when we are walking Mom will say “Lucy, there’s your boy”.  I don’t know what she’s talking about…”my boy” is only a sound.  Another thing I love, there are a lot of snacks on the street.  Mom always yells at me to “drop it”, but she’s not fast enough.  I won’t tell you what they are, but they are good.

The streets are interesting too.  One day there was a wooden slat box lined in plastic on the street.  I sniffed it and was so shocked at what I smelled that I had to jump back.  I can’t describe what it was, but I did a double take.  Mom looked at it and didn’t see anything.  I could walk for hours just sniffing and peeing.  So many have been by the same place, there is so much to notice.

Mom and I go for long walks all over town in the evenings when Dad’s at the gym.  I like that – so many new streets and places to see. Mom tells me what a good friend I am, and how happy she is I am here with them.  Also, we go watch the boats out on the breakwater.  Sometime she ties me to a post and shops for things.  Being tied up used to make me nervous, but I’m a city dog now.

Mom and Dad are happy.  Rita is doing OK, and they protect me from the street dogs. It isn’t as good as my old life, but it is good.