In this land spice traders have moved goods by ship, camel, and foot for centuries.  I simply take an easy 15 minute downhill seaside walk, turn my face to the breeze on a 20 minute ferry ride and saunter from the quay for 10 minutes into the 17th Century Mısır Çarşısı (known as Egyptian Bazaar and Spice Bazaar), where I’m transported into a modern day spice souk.  Arriving at Number 51,  Ucuzcular Baharat  (Ucuzcular Spices) I am happy to hear myself described as yabancı değil (not a stranger)…therefore, with a momentary lull in customer traffic, they quickly mop the floor.

Bilge Kadıoğlu’s heartfelt professional dream is that her customers feel eksik–an absence and wanting–without her spices.  She’s achieved that with us.  When we run out of her custom Janissary blend, we are right back on the ferry to see her.  When our dinner guests ask what we put on our lamb, we send them to #51.  I visit her shop about once a month, and each time I stock up on my staples of  nar (pomegranate) sour sauce; dried blueberries, mangoes and keten tohumu (flaxseed) for my morning oatmeal; whatever other spices we need; and a box each of Jim’s and my favorite Turkish Delight made with honey. 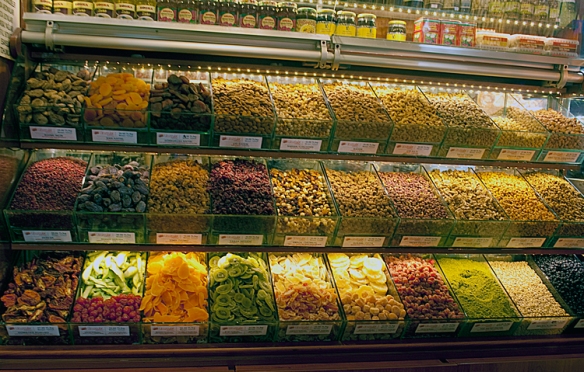 From this wall comes my cereal additives. Over time, Bilge shows me new things like zereşk ( berberis,or barberry). I didn’t think I knew this fruit, but I recognize my Persian friends have cooked with it. I brought some home.

I love to hang out in the back corner in the shop and watch the world pass through sampling spice blends.  Pressed into family service six years ago to manage the shop after her father’s death she was 25, and overwhelmed.  Spice bazaar merchants have their way of doing things…which pre-Bilge (“Beel-guh”) did not include working and competing with a Rochester (NY) Institute of Technology-educated young woman. I know what she means.  As a young ambitious female with work to do, I also needed to be taken seriously to accomplish it.  In different countries and eras, both Bilge and I were, at best, patronized, and at worst, ignored.  Bilge says suppliers would walk into the shop and not speak to her.

This cabinet is from the shop’s grand opening. Bugs stay away, and spice aromas do not transfer or mingle.

Cash flow required Bilge to buy just-in-time inventory.  There were two benefits to this.  Ucuzcular ground all their spices fresh every week – a habit they continue.  With today’s volume, sometimes spices are ground every day.  Also, unlike the rest of the bazaar, where retailers bought on consignment, paying their suppliers once they sold the goods, Bilge paid on delivery, in cash.  That talked.  Today, they don’t look past or ignore her any longer.

Bilge, an industrial designer, didn’t dream of being a “real Spice Girl”, but when the fifth generation needed to step up, she did, all the way.  Understanding the concept of differentiation, Bilge discovered her grandfather’s recipe book of 500-year-old Ottoman recipes.  Agreeing with the Ottoman belief that all meals were a feast, and it is important to cook well, she and her mother proceeded to develop a group of traditionally inspired proprietary spice mixes.  Our Janissary favorite is one of these.  (A Janissary was a soldier in an elite Ottoman corps.)

The wall of special Ucuzcular spice blends. This palette is in my kitchen, I also have the fantasy of taking it into my art studio…not just the color, the actual spices.

Obviously, “proprietary” is hard to control in the Spice Market, but Bilge and her younger brother Ahmet who has joined her since he returned with his MBA from Ohio State, source carefully and Turkish. Ahmet is a good balance to Bilge and equally passionate about their mission.  You will meet him in a later post. They grow special peppers for their blends, carefully cut their spices  to preserve aroma, and use more costly ingredients than many of their neighbors.  In spite of the shop name, they aim not to be the cheapest, but offer the highest value.  As a team, Ahmet is high tech, Bilge high touch.

I like to sit in the corner and watch Bilge or Ahmet pull on a plastic glove, hand a coffee stirrer to each guest and proceed to scoop a smidgen of spice mix onto the tip for each person to taste.  Spice tastings!  Genius. Besides Janissary, they’ve got blends for salads, fish, traditional Turkish köfte (meatballs), chips (French fries), and eggs and so on.  If you feel lazy and don’t want to deal with fresh garlic, use Anatolia Spice.  If you need to “save” a dish you screwed up, add Smoke Spice–guaranteed to make a bad dish good.  Imagine your head spinning with these exotic flavors, and how to keep track of it all?  Don’t worry, you are provided a scorecard.  We keep ours in the spice cabinet, to remember why we bought each blend.

We always pull this card out when we plan a meal. Notice that Dolma Spice can be used in pumpkin pie. I’ll give it a try on Thanksgiving. I trust Bilge.

Ucuzcular means “the guys who sell cheaply” — wholesalers.  While trading as a family business goes way back, the genesis of the current store flows from Bilge and Ahmet’s grandfather, Dursun Ucuzcu and his business in Malatya, about 2/3 of the way across Turkey to the east.

In Malatya, Dursun Bey (Mr. Dursun), ran a shop equivalent to a contemporary supermarket named Ucuzcu.  Needing to communicate a move to a new location, he stepped in a bucket of blue paint and walked between the old and new stores. Bilge has her grandfather’s flair for PR, which landed her on Refika’s TV show.  Refika is a Turkish Rachel Ray with a cookbook called Refika’nin Mutfagı, Cooking New Istanbul Style (Refika’s kitchen).  Bilge said, “I feel a little bit famous now”.

The first six letters of the shop sign came from the store in Malatya. The color blue is the same as the paint their Dede (grandfather) stuck his shoes in to walk between his stores.

Ucuzcular is not limited to gastronomy.  In Turkey, spices are used in the Eastern manner as health agents.  Saffron tea and rose water are good for the mood.  Bilge is certified in aromatherapy and Ucuzcular has a whole colorful wall of essential oils, which may be used to improve one’s body, home or soul. I have a recipe for homemade mosquito repellent that includes lavender oil.  Bilge and Ahmet have given many of the nontraditional oils fun names…the one I bought for my home is called Amor.  They don’t mess with the traditional names, the glass vials or the boxes they insert it them in…Türks are particular about their traditions and aren’t keen on “improvements”.

Getting to know people like Bilge and Ahmet is the Turkey I am most interested in.  They are smart, educated and creatively applying their talents to advance the challenging business they inherited.  I feel privileged to hide out in the corner and watch their shop hum. 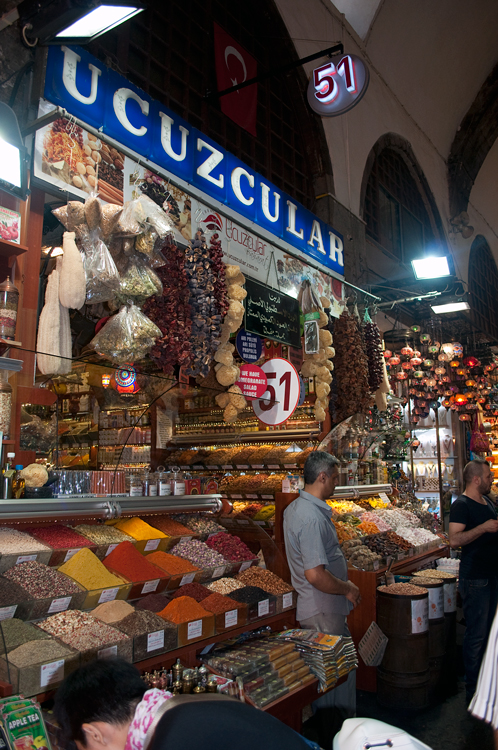 PS.  To my non-native English speaking friends, the title of this post does not mean Ucuzcular is full of flies, rather,it is an American phrase which means ‘invisible observer’.