By the time we are in our 60’s we’ve had a long life, as I have been reminded twice in the last two days.  Last night we joined an expat friend and her house-guests from Alaska for dinner at Çiya Sofrası ( http://ciya.com.tr/index_en.php ).

About “the Çiyas” as they call them on the English version of their website…”they” are a destination restaurant.  Frequently when a restaurant gets popular it expands into adjacent but separate storefronts.  There is another wonderful restaurant(s) we happened to walk by and enter in Beyoğlu last year, Ficcin.  It can seem kind of confusing to see several restaurants of the same name on a block…it requires coordination between dinner partners who arrive separately, but it works.  Çiya is about a 7 minute walk from our place, and we find it SO convenient when people we’d love to see volunteer to make the ferry trek from the European side of İstanbul to Kadıköy to eat there.  It is worth a trek from anywhere in the world, in my opinion.

This post, however, is not about Çiya, but rather about memories and a different miniature food place in Moda. 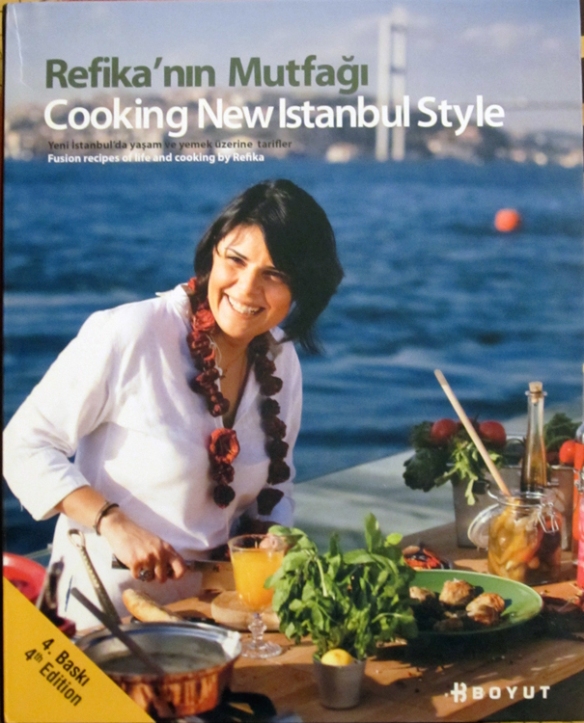 A Turkish TV Food personality…our newest cookbook. (this book is not related to Çiya either…)

So, we ate delectably with Barbara, Scott and Cindy last night, and as we unfurled the stories of our lives for each other we were amazed at how long our tongues had become.  Then this afternoon with our Türkçe tutor we (trying) repeated the recitations in Turkish. The trick to keeping peoples’ attention is to paint with a VERY broad brush.

I moved from Los Angeles to the Upper West Side of Manhattan in 1976.  In 1977 on Columbus Avenue, between 72nd and 73rd a tiny food shop opened called The Silver Palate.  I walked by it for years.   Two women catered prepared foods, originally cooked in their home kitchen around the corner, via their storefront and developed a line of foodstuffs that are still sold in various locations.  They sold the store in 1988 and it closed in 1993.  Sheila Lukens and Julie Rosso also wrote several cookbooks, the first being The Silver Palate Cookbook.  At its 25th anniversary re-issue they said:

It took slight madness to open our little store in 1977. Florence Fabricant was writing an article on the renaissance of Columbus Avenue, … she was on a deadline and called and said, “What are you calling your store?” We didn’t know. “Why don’t you call it The Silver Palate,” she said.

I wasn’t  their target customer because I cooked, and I’m not sure I ever bought a meal there.  But I have been cooking out of their books since they were published, and of the 9 cookbooks I brought to Turkey, 3 of them are dog-eared Silver Palate editions.

The back cover of a very ratty The New Basics Cookbook. More 80s nostalgia, including food presentation…

What this has to do with Istanbul is Bizim Ev.  Istanbul and Turkish cuisine with its regional variety is foodie Nirvana.  There are many Istanbul and Turkey food bloggers, and tracking down the great places is easy.  Once you start following their advice you learn that the look of the place doesn’t mean much.  Pick any place with a lot of Turks and you’ll likely have a good, if not great, meal.

When we first moved to Turkey we didn’t have the energy or, actually, the bravery to cook.  Figuring it all out took so much time.  I stood in grocery aisles frozen, eyes glued to my smart phone, trying to figure out what I needed was called, and to understand what I was looking at any time it wasn’t patently obvious.  So, we ate a lot of take out.  Walk down any large street and there are steam tables loaded with food.  Istiklal Caddesi has many of these mutfaklar (kitchens), Karadeniz (Black Sea) Mutfağı, Kayseri (town near Kapadokya) Mutfağı and so on.  We also found our favorite kebapçı and balıkçı (kebap and fish houses), and we’d pick up food on our way in.  After awhile, however, the food all started to taste alike, we outfitted our own kitchen with the basics and we began to cook. 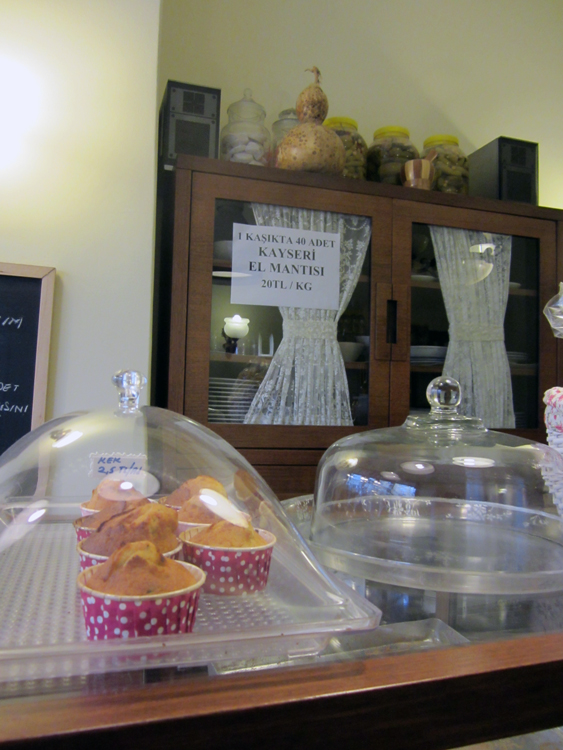 Handmade mantı pasta for sale, Kayseri style, by the kilo. Mantı is like small raviolis.

There are still those days when we are tired and there is no food in the house.  Enter Bizim Ev (means Our House).  Not surprisingly, this is a common name for a restaurant.  Our Bizim Ev is a 5 minute walk away.  It is a tiny storefront, about as big as The Silver Palate was.  What comes out of it is a miracle for the tired and hungry.

I’d walked by it many times and it looked like a tiny bakery – that’s because homemade borek is sitting in the window case.  It has a table or two inside…and one or two outside, which no one was ever sitting at.  And, it has Nezahat Hanım, a woman who appears to be in her 50s and cooks like an angel.  It is a truism that all food is compared to Mom’s here in Turkey.  We’ve found our own Turkish mother.  Her husband Ali Bey works with her… it was always him I’d see as I walked past, he’d be closing up the place before our dinnertime, at the end of their day.  (Those hours confused me also, bakeries are often open quite late).

Nezahat Hanım dishing up our lunch.

Eventually, I read about this shop, and one day we walked in, carrying home a paket for lunch.  It did not taste the same as all the other kitchens.  Nezahat Hanım’s food is fresh, beautifully cooked, not oily, and delicious no matter what items we choose.  She cooks a limited menu each day. There is no steam table. 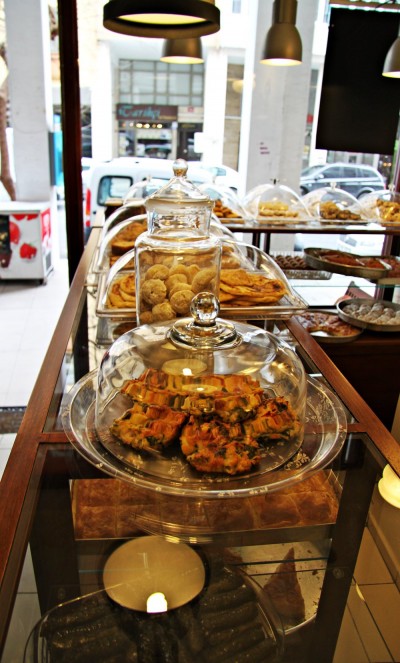 After rereading the article, http://istanbuleats.com/2011/12/bizim-ev-the-stash-house/  I must go try all of the borek, which Jim has realized he does like after all!  (see post https://2istanbul.wordpress.com/2013/03/25/entry-in-the-diary/).

Bizim Ev is reminds me of my early adult days in Manhattan.  I’m not sure whether I love that link to my younger self or the food better.