There are two stories in the news now that Americans are reading.  One is the stabbing death of a New York woman at the end of her solo stay in Istanbul, and the other, the unfortunate suicide bombing of the US Embassy in Ankara, yesterday.  I followed the Sarai Sierra story and was sad and disappointed, but not surprised given the amount of time she was missing, that she was found dead.  I feel for her family, I can’t imagine their pain, they must be living a nightmare.  May she rest in peace. 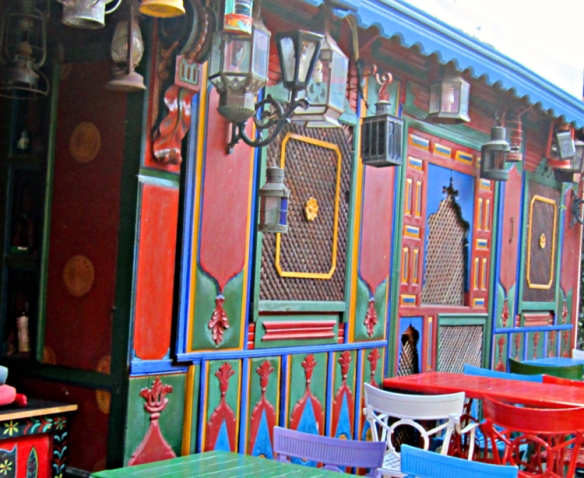 Colorful Ottoman screens in the patio at Kybele Hotel, Sultanahmet.

The 1978 movie Midnight Express formed my generation’s impression of Turkey.  A true story of an American jailed for trying to smuggle hashish out of Turkey in 1970, the movie was scary.  Billy Hayes, the prisoner, who escaped and wrote the book, later criticized the movie for its portrayal of Turkish people.  He understands that the filmmakers had to change his story to tell theirs, but complained that they showed no good Türks.  He apologized to Turkey for his portrayal in the book and said he actually loved Istanbul and got along great with the Turkish people until he was arrested.  He conceded that people arrested in the US might not be thrilled with America either.

Musicians performing on a rainy day in Moda, Kadiköy

Americans who read the news and ascribe some bad news to define an entire culture might consider what people in other parts of the world think when they see headlines about events in the US.  More than one person from this side of the world has told me they believe there are frequent mass shootings all over the US.  Unfortunately, given the news I’ve read since I left on 04 December, it is easy to believe the same thing.

I’ve been living in Istanbul now for two months.  Admittedly, I am on my honeymoon with the place, but my disappointments are few.  I can think of two at the moment, 1.  I struggle to hear the call to prayer.  I wanted to live with it, to learn its cadences.  Turkey is a secular state.  Istanbullu are busy people – they work very hard.  I have heard it said that the call to prayer is loudest in the tourist areas…in residential areas, people want to sleep in. Because of the society’s secular identity, a Turkish friend has called Turkey “Islamophobic”.  2.  My other main concern is the very uneven streets.  Cobble-stoned streets are charming, but very hard to walk on.  This old city, appears to lack the OSHA (Occupational Safety and Health Administration) regulations of home. I’ve gone flying off my feet a few times, which is alarming.  In each instance Turkish passersby rushed to my assistance, and my pride took the greatest bruise.   I hope I will become more fleet of foot with time.

International guests from the US (Jim and I) and Israel at a Turkish dinner party.

I love the place and the people of Istanbul.  It is a huge metropolis, so I most closely compare it to my experiences living in Manhattan.  However, there is an equal or greater engagement with nature in the parks compared even to suburban Foster City, California where we last lived.  There are feral cats and dogs all over Istanbul, and they are fed and cared for.  Türks may not take them in as pets – although many do – but they will cover a box with plastic to house a street dog, and reverse its direction when the wind changes.  Butchers provide scraps.  Residents and shop keepers put out food. Few of these “homeless” animals are afraid of humans.  The dogs and cats frequently seek a petting. Even the very noisy, ubiquitous crows are not afraid of people; I can walk right up to one sitting on a park railing.  There is enough food for everyone, in affluent neighborhoods at least, and there is a pleasant harmony among humans and other species..

There are odd contradictions, though, with some Türks being afraid of Lucy when we are walking her on leash in a crowd. Lucy also gets annoyed by the street dogs stealing her ball, but they are social and want companionship and to play.  Lucy and a local dog and I were walking together.  I felt sad the other cold rainy day when I had to shut our building’s front door in his face, after letting Lucy in. 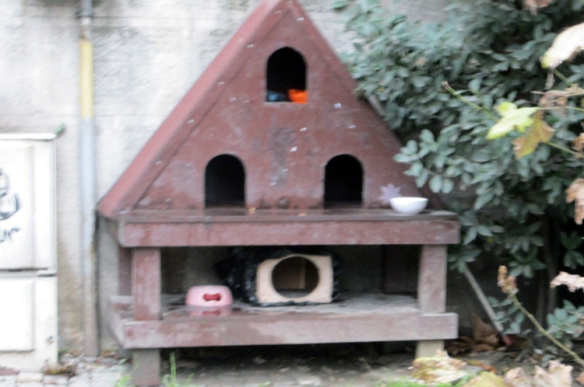 A cat hotel in Cihangir.

Watching ferries sail swarmed by seagulls is a funny sight, reminiscent of flies swarming a horse.  People feed them off the front and back decks.  It is socially taboo to throw bread into the trash, so it makes its way to street animals and birds.  And, I’ve been told that spring is kitten season!  I will love that!  The engagement with nature extends to the ferry stations too.  Waiting for a ferry, I noticed a woman in the station with a cat on her lap. I assumed she was traveling with her pet, but saw no carrying case.  As I walked out to the pier, I noticed other felines lazing among the waiting passengers, and realized the cat’s lap was temporary. 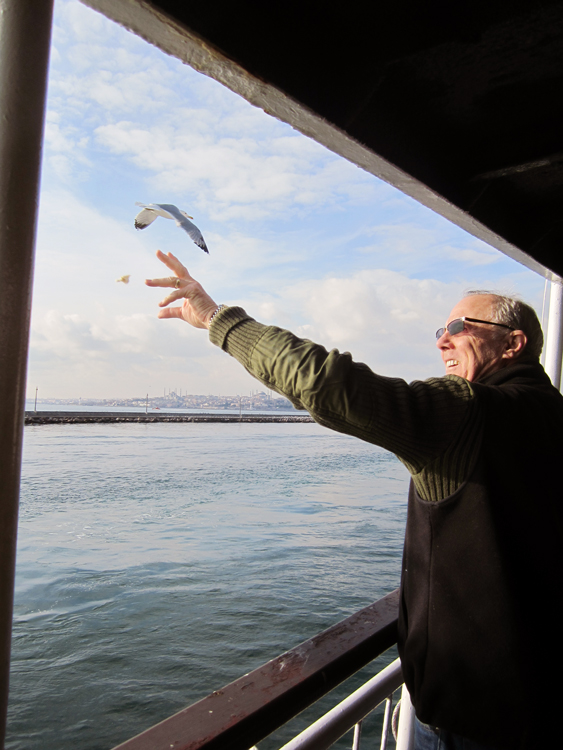 Getting rid of day old bread on the commute to Europe.

A culture as nice to animals as this one tells a different story than the headlines of horrific events.  Merel (see prior post  https://2istanbul.wordpress.com/2013/01/27/running-with-scissors/ ) and I both walk  alone in the dark.  It is necessary to get around.  Both of us pay attention and are careful, and we both feel it is as safe or safer here as unescorted women than it is in our own countries of the US and Netherlands.  To go to my life drawing group’s evening meetings, I have to walk around the construction at Taksim Square.  It is dark and uneven, so I stay close to others and walk purposefully.  Places that would seem forbidding at home, frequently here are just normal walking routes that are not lit as well as I would like.  In all big cities in the world, one has to pay attention.  Even in suburbs in California, unless I have Lucy with me, I’m less comfortable walking alone at night than I am in Istanbul. 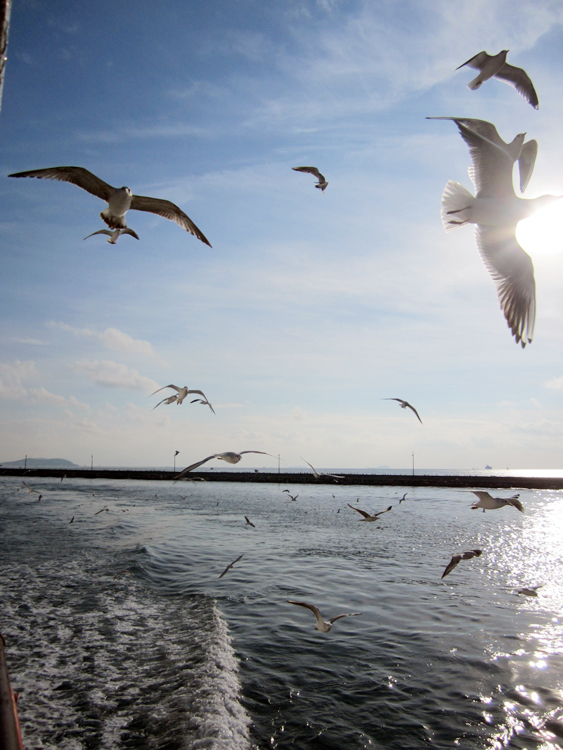 There is gentleness, helpfulness, and a civility among the people here that I don’t see in the US, in big cities or small towns.  It is not nirvana, not perfect. We are all the same, however, under the skin .  Istanbul is very comfortable to live in.  I find it magnificent, and captivating because of its beauty, society and historic civilization.

A metal bed in the sun makes sense.

I visited Istanbul in 2010 for a conference, traveling home August 7.  On August 8, a German tourist celebrating her 50th birthday and wedding anniversary with her husband was killed in San Francisco crossfire between teen-aged gangs. The Germans had just arrived and were looking for a restaurant in which to eat dinner, before 9 pm at night.  Union Square is a central tourist hub in San Francisco, supposedly one of the safest locations in the city. Ironically, a week earlier, I had been referred by a US friend to verify the safety of her American friend’s prospective travel to Istanbul.  To her questions, I could only reply “if you are not afraid to travel to San Francisco, I wouldn’t be afraid to travel to Istanbul.”  Bad things happen in good places, and one may arrive at the wrong place at the wrong time, anywhere.

2 thoughts on “Turkey in the News”